This is my estimate on how the development on JDevTools will take place. It's based on rough estimates, chocolate chip cookies and a bit of common sense.

I'm in the unfortunate situation of having my last examn June 19th, which means that I'll start out soft. Don't worry though. I will get raw and vicious when school is over and I can commit all my time to the project.

Application Interface - May 25th to June 20th
The application is the user interface we will use for JDevTools. It will be made to resemble the Joomla installer in how it looks and works. Since I'm stressed out about calculus this time period, the goal for this timeframe will modestly be to develop a useful beta of the application. Polish and tricky features will be added later on.
This is also a phase where I will contemplate on how to do the Script system.

Script System - June 20 to July 5th
This is where I'll get my fingers really dirty. This is the defining phase. The phase where the framework for JDevTools will be outfigured, engineered and assembled.
The time will be spent the first week with experimentation of different approaches, the next week for building the System and the remaining days for testing it.

Basic Tasks - July 5th to July 12th
On the newly developed system, I will then rush to set up as many common tasks as possible, trying my best to get out in the corners of what is possible and improving the Script System in the process. This development will lead to the first beta by July 12th

AdminList - July 12th to July 19th
As the first beta munches code, my attention will move to the AdminList library that I will work on with a basis in some existing code I have laying around. I will focus on getting code up to joomla standards and improving ajax and quick editing support.

Inputs - July 19th to July 26th
To make everything nice and user friendly, we need to let the scripts ask information of the users in a nice way. They don't need to, of course, but they can, and to make this possible, I will need to focus my attention on this problem.

Packaging - July 26th to August 2th
An important element of component development is the packaging, which I will spend 5 days focusing on getting right. That is, collection all files in a zip file and create an xml install file matching it.

Return to Tasks - August 2nd to August 10th
Having everything else basically in place, it's time to return to the tasks that are still missing. This is amongst other the integrating with the adminList library. I will spend a week getting everything toptuned when it comes to scripting capabilities.

Polish and Testing - August 10th to August 24th
With everything else in place it's time to return to the application and getting it beautified and slick looking. futhermore the a whole lot of testing needs to be done to make sure everything works as I intent.

Summerbreak! - August 24th to September 13th
Time to barbeque down by the lake and hike in the mountains and hang out with all the friends who haven't seen me during google summer of code. Although I bet I can't help but coding a little, just to make time pass.

JdevTools aims to help developers create components. A lot of tasks during extension development are very repetitive tasks such as setting up files, creating database tables and writing classes for the mcv structure. With JDevTools, it will be easy to automate this process, either by creating simple scripts taking care of the process, or by using scripts that are already made. JDevTools will include tools for:

How it will work

The purpose of JDevTools is to create an environment where developers easily can execute scripts, make their own scripts and use other peoples scripts. There will continuesly be new scripts added, but anyone should with ease be able to write their own.

The base of JDevTools will be an application (like the joomla installer) which will take the user through 4 steps in order to create the component:

This will enable a developer to create the base for a component by clicking a couple of times, providing some input and click run. It's important to notice that this will not create a working component on it's own. It just creates an easily extendable base for developing a component.

A script is a set of tasks, like creating all the files for a component, or registering a component in the database. With the project I will create some basic scripts, but the main goal is to leave the scripting process transparent so developers easily can extend existing scripts or create their own.

Each script that can be run in JDevTools is basically a collection of tasks we provide with an api. The tasks are simple, atomic and cover every single aspect of creating a component.

It's important to understand that this is not neccesarily an exhaustive list. During the development, some tasks might be split in to two atomic tasks, if this make more sense, or gathered to one. The important part is to make a solid foundation for the scripts. Not so much exactly which tasks are included or not, as new ones always can be added later on. I will be open to suggestions under the development process, and I expect to gain a lot of inspiration for new tasks the moment I get my hands dirty.

As an addition to the scripts, JDevTools will also provide and use a library for making admin tables easier to create. The library will make it easier to create tables by integrating data filtering, ajax processing of common tasks like publish/unpublish and quick edit to change data on the fly. To construct an admin table should be a question of specifying the content of each collumn, and then letting joomla take care of the rest. Practically speaking a possible way of doing it could look like this:

And then in the tmpl:

This would create a table with 3 collumns (besides id and checkbox),

Then a __toString method would render the table, filling in the

The main focus with this project is to provide a base that's flexible and extensible. Nothing get's complety right the first time around, but with JDevTools I hope that a strong foundation will make it possible for us to gradually achieve something very useful. This means practically speaking that everything must be coded with extensibility in mind. Tasks must follow common procedures and be easy and intuitive to add. Scripts must be simple to understand and easy to create. Libraries and apis must be straightfoward to use and easy to extend. With a strong foundation I'm very confident this can be a very valuable tool for web developers using joomla. 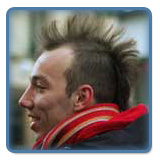 I'm a 23 year old Dane,  living Lausanne, Switzerland where I study computer science at EPFL.  Before I started studying, I worked at
NotWebDesign, developing web sites with Joomla.

My project aims to make it easier for developers to develop with Joomla. For that purpose I intend to create tools and libraries that automate a lot of the tasks normally associated with component creation.

Discuss the project in the Forum Thread