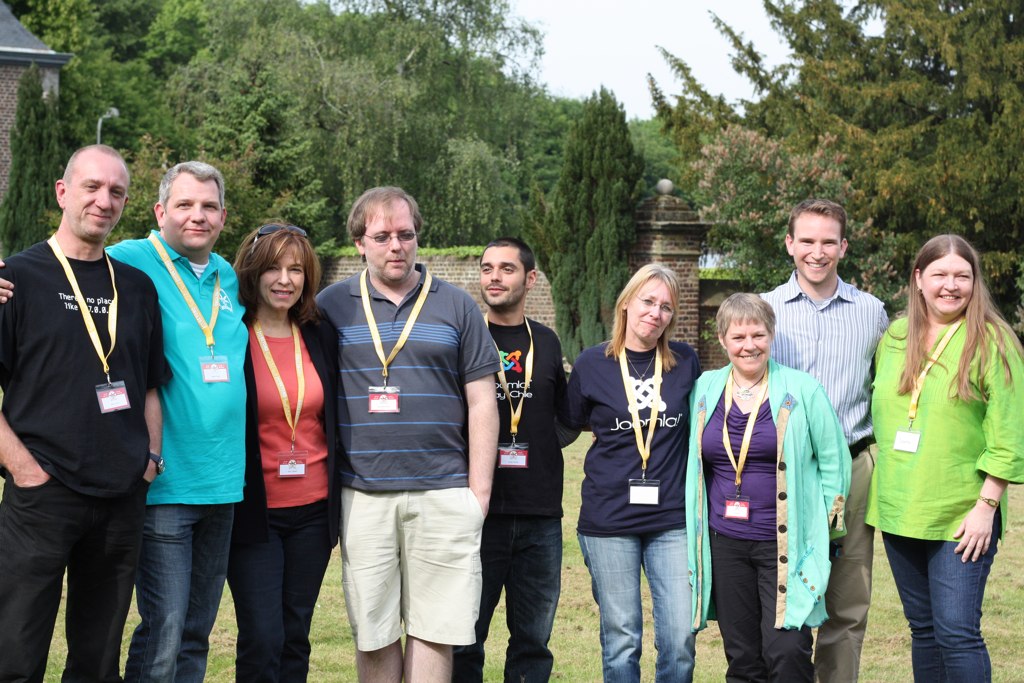 From May 6 - 8 in Kerkrade, The Netherlands, 220 Joomla! community members gathered at the unforgettable JandBeyond conference. Among them were 10 members of the Board of Open Source Matters (OSM). We came as community members to connect, network, and meet again or for the first time many of the people who make the Joomla! Open Source project such an exciting place to be.

The large turnout of OSM members allowed us to share experiences and goals as a group with the attendees, and to talk as a group about impressions and lessons learned from this event. I think everyone will agree that JandBeyond was an invaluable experience in every way!

A high point for all of us was standing together during Ryan's well-attended "State of OSM" session. After he presented achievements from the past year, various members shared OSM goals for 2011.

The goals included increased revenue sources, a new online shop, trademark team streamlining and improvements, upcoming conferences, a Joomla! Supporters club, PR and awareness initiatives, and the simplification and documentation of processes. The presentation was followed by questions from the community about revenue spending and leadership dynamics.

The following is a summary of the question and answer time:

Community: What is the purpose of raising money? What are the plans for that money?

Community: Some ideas for the spending of increased revenue:

A Summer of Code funded by Joomla
Getting all of OSM, CLT, and PLT together in one place for the world community to talk about the goals of Joomla
Pay a consulting firm to do an analysis for security and performance
Give a portion of surplus to charity. (OSM: We donated money to SFLC this year)
Do a targeted prize contest with specific requirements with a cash prize to the winner

OSM: We would not do it the way it was done before. If we do consider it again, it would be only for a very specific task.

Community: Congratulations on your structure and leadership but who is going to influence the other parts of the leadership?

OSM: We can use leadership by example. There are processes being put into place that give opportunities to understand, influence and encourage. There will also be a joint summit in July.

Community: There is a perception that OSM can give active guidance.

OSM: It’s not OSM’s role to be the teacher and the others to be students. We can only lead by example. The theme of the weekend is community. The community has to come together and work together.

OSM: The leadership is working on getting better communications and clearer channels.

Community: OSM went through organizational training but what about the other teams? Did they get anything from that? It should be that if you are going to be a part of the leadership then you should have professional development.

OSM: OSM was fortunate to be offered a training opportunity. Gunner will be working with leadership skills at the summits.

Community: The way the groups are growing is positive because it spreads out the work and reduces the perception of cronyism. It would be good to see that happening with the CoC.

A common theme that we all came away with was appreciating the chance to interact with so many community members and to listen and be heard.

It was a privilege also to have Louis Landry attend from the Production Leadership Team (PLT). He made himself available to talk at length with many attendees. Peter Martin and Paul Orwig represented the Community Leadership Team (CLT), making a total of 12 leaders present at JAB. There was much positive feedback about interaction between the community and the leadership throughout the weekend.

An energizing spirit of innovation, passion, communication and respect characterized this event.

The State of OSM Address - Ryan Ozimek from jandbeyond on Vimeo.