How One Joomla Company Is Improving Lives in Rural China 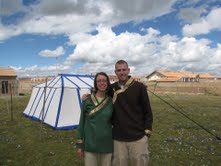 Over the last few months we've been interviewing developers who have worked on widely popular Joomla sites.

However, not every successful Joomla developer has sites with a shelf full of awards or 5 million visitors per month.

We're now going to turn our attention to other types of successful web design firms. We're particularly interested in how people make a living with Joomla. In a new series of interviews we're going to investigate how people like you are able to leverage Joomla, start their own businesses, become independent or work to achieve other goals such as social change.

If you have an interesting Joomla success story about to tell please email .

First is Allie Whitney from Global Nomad. She works with unemployed locals on the Tibetan Plateau in western China, providing free training and hiring them to become Joomla web developers.

Where did the idea originally come from to start a web development company on the Tibetan Plateau?

Many rural areas of China are experiencing the issue of "brain drain"--the loss of nearly all educated people who, instead of remaining in their hometowns after receiving education, choose to go to the bigger cities to find work. This creates many social and economic problems for both the rural areas as well as the cities, who are being inundated with migrant workers. One major solution to this problem is to create more industries and jobs in rural areas that require people with higher levels of education. In many cases, the infrastructure is already in place to allow for the development of more industries; cell phone coverage and high-speed internet, for example, are commonplace even in rural areas of China. But most businesses are still hesitant to move or expand into these rural places, especially on the Tibetan Plateau, because of their remoteness and lack of conveniences. Bert Verbeeke, an electronics engineer and former IT project manager from The Netherlands who had visited western China several times, however, saw the unique opportunity this situation presented for the IT industry. He realized that not only would it provide skilled jobs, thereby helping to bring educated people back to the rural towns, but it would also open up a whole new consumer market to the local people, who traditionally have been limited to selling goods and services to only those in their immediate area. After discussing his idea with local government officials in Qinghai Province, he was invited in 2005 to move to the small town of Zeku on the Tibetan Plateau with his family and begin implementing the idea.

What is the area like where you are located? 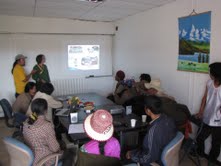 Being at an altitude of 12,000 feet (3700 m), most people imagine us to be sitting on top of a mountain, but actually it is pretty flat here since we're on a big plateau above tree-line. It is cold most of the year (down to -30 F / -35 C in the winter), with short summers that are welcomed by horse races, picnics on the grasslands, and herdsmen abandoning their winter homes for mobile summer tents. Zeku County is made up of 95% Tibetans, most of whom are semi-nomadic herders of yak and sheep. The county seat, Zeku, where our office is located, has about 5,000 people and is a stopping place for the nomads to buy their needed supplies before heading back out to the surrounding grasslands. It's a bit like the "wild west" and it's not rare to see horses and yaks tied to telephone polls while their owners are busy in town. Because western China is developing so rapidly, some things that might be considered standard in infrastructure development have been skipped here, which makes for a unique situation. For example, while Zeku is still lacking running water, high-speed internet is available to anyone who signs up for it at the local telephone office (and a free wireless router comes with your internet package). Zeku is growing fast as people move in from the surrounding grasslands and look for sources of income other than herding, and we can see that by the 1,000+ construction workers temporarily living here at the moment.

What are some of the biggest challenges to running a web design business where you are located?

Many of the challenges we face are simply a result of being one of the first companies to bring the new industry of IT to rural western China, thereby bridging the gap between this rather isolated town and a worldwide market. There is a steep learning curve for locals who want to become a website programmer with us, not only in IT knowledge but also in their understanding of other cultures and foreign businesses who hire us to develop their website. For our Tibetan employees, staying with one job for the long haul, getting used to a consistent eight-to-five job, and working within a structured team environment has also proved challenging. It's not surprising though, considering their nomadic, no-schedule backgrounds.

Another challenge we face is that to many businesses in Europe and the USA, rural China is an unfamiliar place that they have not previously considered as a viable outsourcing option. Therefore it can be a challenge to help them understand that even though outsourcing their IT needs to rural China may be a new idea, the quality of service and ability to meet client requirements is not necessarily compromised; our team includes not only local programmers but also Westerners who are familiar with industry standards and trends.

How did you get started using Joomla?

As all of our initial employees had no prior training in web design, we were looking for an open-source CMS with powerful features and yet a simple interface. Several web designers and developers that our company was working with at the beginning recommended Joomla. As we researched CMS options, we found that the outlook on Joomla was good and many people in the industry predicted it to be hugely successful. Thanks to Joomla's popularity there's lots of support in the web development community for it and tons of resources. Since our clients' needs are all so different, we rely on the huge array of extensions that are out there. Plus, our clients come from several different countries and so we appreciate and make use of the large number of translations for Joomla that are available. Maybe one day there will be a Tibetan translation of the program! 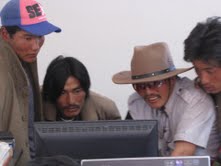 Right now Global Nomad has 3 full-time local (Chinese/Tibetan) employees and 1 studying under us with the hope of joining full-time soon. Our staff also includes Bert (the owner) from The Netherlands and his wife Jeanine, and my husband and I are here as visiting consultants and business partners for a while. Our office is a big mix of cultures--Tibetan, Chinese, Dutch, and American--plus our clients are from all over the place, so needless to say it's never boring. We're always on the lookout for more locals who have enough background education to take up web design, but that's hard in this area that doesn't even have a high school yet. At one point our local staff was up 6 people, and we're working to get it back up there; our goal is to have 10 local web developers by 2013. Global Nomad occasionally receives visitors who are interested in teaching new web design technologies to our employees, or who simply want to check out what we're doing. This always livens up the office a bit, and the employees get excited when someone travels halfway across the world just to teach them something new for their work.

Although our office is heated by a stove that takes coal and yak dung, we've worked to create a professional office environment, which tends to stand in stark contrast to the rest of the town. Yet this helps our employees understand the level of professionalism required by our clients, who are often half a world away. Having said that, our local employees undertook the decorating of the office... so in addition to boring office basics like computer monitors and swivel chairs, we get to gaze upon giant framed pictures of yaks and horses and blazing multi-colored trim on the front wall.

Where does most of your business come from? 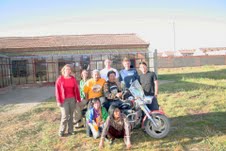 Traditionally most of our business has come from The Netherlands and the USA because of key contacts Global Nomad originally had in those areas. Now that we have grown, our client base has also expanded to include Australia, Great Britain, Germany, Thailand, and even China where we're based. While most of our income is from end-user web design and development at the moment, we are hoping we can form partnerships with bigger IT companies in Western countries who will regularly outsource to us, as this would create a more steady level of work for our employees.

How is your company and the IT industry in general perceived by the local community?

I think it's safe to say that the majority of the people in this area have never used a computer, much less the internet, and aren't sure what the point of it is. Most people don't realize that there's an international web development company here, and just figure that we foreigners are here as English teachers at the local middle school. 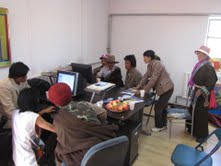 In 2009 when we moved to a new office, we announced it like crazy and invited the whole community to come see. It was a fun day of introducing our business to people who had never previously entered a professional, modern office or sat down at a computer. They got to tour the office, try their hand at computers, flip through our brochures, and hear why we're here and what we're doing. We also threw a huge feast in a traditional Tibetan tent in front of our office that day to help locals understand that even though we are international company, we value local culture and want to be an active part of the community here. Our employees will probably always have a hard time explaining exactly what they do for a living. Joomla is not likely going to be a hot topic of conversation over a cup of butter tea any time soon. Yet as Global Nomad grows, we hope it can be a stable presence in the community where bright locals can stay local while getting a shot at a new career.