We introduced the one-click update in Joomla! 1.7. When it worked, it was marvelous. Unfortunately, it wasn’t as robust when it came up against all the various hosting situations and differently configured systems. Many people turned to Nicholas Dionysopoulos’ AdminTools to do their updates.

We are happy to announce that with Joomla 2.5.4, we have added a new core component, Joomla! Update, that Nicholas wrote based on his experience dealing with updating across a wide variety of hosts with his Akeeba Backup, Kickstart and AdminTools. Once you have the component installed, you will be able to use it for the next release. So all of you who update to 2.5.4 will be able to use it to update to 2.5.5.

This component will also let you decide whether you want to continue getting updates for the 2.5.x long term support release or jump up to the newest 3.0.0 short term release when it comes out in September. See the section on Options for details.

The update status of Joomla is still in the quick icon on the Control Panel. When you click it, it will go to the new Joomla Update component instead of the Update tab on the Extension Manager. If there is an update available you will see the update listed. Most people will leave the Installation Method on Write files directly, but you can change that to the slower  Write files using FTP if your host won’t let you write directly to files.

All you need to do is click on the Install the Update button. As usual, we highly recommend backing up your system before you update.

If you prefer, you can still update your site by installing it in the Extension Manager  by uploading the zip file or by posting the unzipped files in  a temporary directory online or URL. For more details see https://docs.joomla.org/Upgrading_from_an_existing_version

Most people won’t need to make any changes in the Options, but this new updater has options that increase flexibility in updating. If you go into the Options you will see that you can choose your Update server which will determine which version, or from where, you want to update. 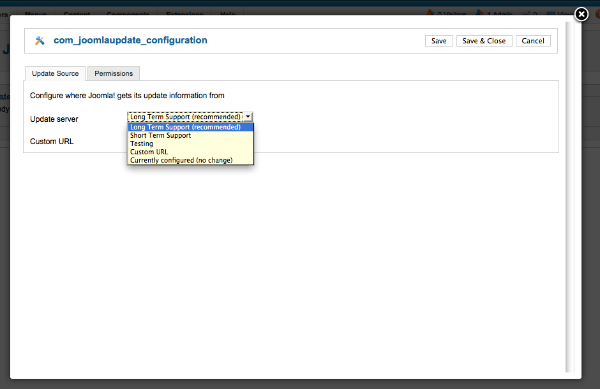 Long Term Support (recommended): This is the default. This means that it will continue to update you in the existing 2.5.x series rather than updating you to the short term releases such as 3.0.0 when it’s released next fall.

Short Term Support: This will update you to the newest production release, such as 3.0.0 when it is released. It will not suggest updating you to an alpha or beta release.

Testing: This will be used by the Joomla Bug Squad to test updates before releasing them.

Custom URL: This allows you to specify a specific URL for an update server. It could be used for special packages, such as for different languages, or by developers. If you select this, then you need to also fill in the Custom URL that points to the deployment server for the update.

Currently configured (no change): This will update based on whatever URL is listed in the update sites table in your database.