Vote for the Version

This is a report from the Joomla Leadership Summit now underway in San Jose, CA. Members of the Community Leadership Team (CLT), Production Leadership Team (PLT) and the board of Open Source Matters (OSM) are busy discussing the best foot forward in all areas of the project.

The PLT had our summit in the days leading up to the overall Leadership Summit. We'll share shortly the results of that summit, but we wanted to get some direct feedback from the community on an issue that affects many.

We decided to make a small change to the way Joomla versions are numbered. If you have read about the new development cycle, you know we now have a new Joomla version every six months and one long-term-support (LTS) release every 18 months. Versions 1.6 and 1.7 are six-month releases and the next release in January 2012 will be an LTS release. This way, users have a choice. They can get the latest and greatest version by updating with improvements every six months, or they can have a more stable feature set with updates every 18 months.  Maintenance and security releases will be done as necessary for both LTS and STS releases during their support periods.

To try to make this as clear as possible to users, we have decided that the long-term releases will always be labeled as x.5 releases. For example, 3.0 and 3.1 will be regular, short-term six-month releases. The following version would be 3.5, indicating that it is a LTS release. Version 3.5 will be supported for 18 months. In the meantime, we will release 4.0 and 4.1. The LTS replacement for 3.5 will be 4.5, 18 months later.

We would like to present two options to the community to decide how to proceed with this versioning approach. 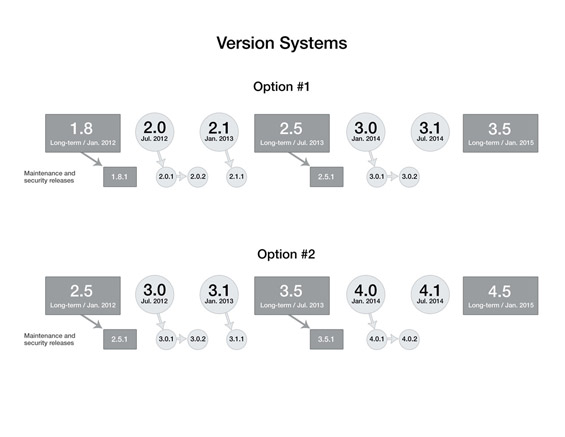 Click on the diagram above to view a larger version.

Vote for the option that makes the best sense here: