Interview with Matthew Philogene about Afro.who.int

This is the fifth in a series of blog posts about major Joomla websites and the developers who built them.

This week we're talking with Matthew Philogene about his role with Afro.who.int, a World Health Organization website.

1) Hi Matthew. Could you tell us a little bit about yourself? 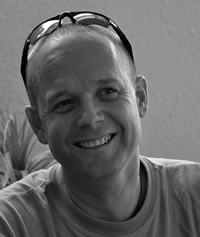 "Offline" I enjoy Travelling, Hiking & camping, Rock climbing and Off-the-beaten-track Travel to remote parts of South Africa (no-internet!!).  All of this is off-set by the hard work we do Online in Web Strategy Development & Design from our offices, located in Cape Town, South Africa.
I have been involved in the Online Industry for over 10 years. Obtained a diploma in Marketing and Advertising, before going into the Online Industry. My main passion lies in Solution Development for clients using popular open source systems, and seeing our clients businesses grow to success, as a result of the Websites which we develop.
I am also a co-organiser of the Joomla! Day Events in South Africa, over the last 3 years we have organised 6 events around the country.

3) How did the project with Afro.who.int come about?

The project came about as a result of the need to move form a static site to a dynamic site with decentralized web content management capability. We were approached by WHO and a South African company to perform an analysis based on Joomla!


We spent a long time going through the site requirements and breaking this down into a workable document, where we detailed exactly what technical elements would be required for the project. Based on this a proposal was sent off to WHO. That was middle of 2008. Work on the site only started in Jan/Feb 2009, where we where asked to look at developing a design and integrating the technical elements.


WHO would do the content, in 3 languages, and our partner would be on-site, training the organisation on how to use the system.

4) Do you know why they chose Joomla?

A comparison was made with other CMSs and Joomla was identified as the CMS that would meet our needs. Joomla was also being used by another region in WHO enabling more internal collaboration and information sharing by using the same system. Our company supplied the analysis which helped in the decision making process to choose Joomla! as the preferred system.

5) What extensions did you use in building the site?

We used the following extensions on the site:
What we would like to have had in 2008: We would have been bowled over if systems like K2, Zoo and Flexicontent, where around when we had started development, as this would have made integration a lot smoother. These systems have added so much more possibility in terms of adding and creating content, that the days are gone when you are simply limited to title and text.


Plans for the immediate future? We will be looking at moving some of the content away from the Joomla Core, and into a CCK. Which one we have not fully decided as this depends on certain functionality which either of the 3 above mentioned do not currently have. User management will be introduced into the system. Where users will then edit content from majority of the African Countries which are listed on the site. 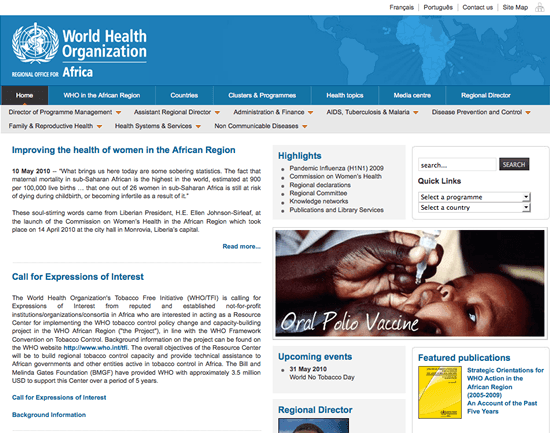 6) What obstacles did you come across during the build?

This is a summary from our team in no particular order...

7) How successful has the site been as a whole?

The site has been very successful with the organization and it has been a major change from our previous site. It has generated interested from staff in our region and other WHO regions.
Since the launch the stats have grown everyday. A breakdown as follows:
The best part of the site is the client is managing this all by themselves. Only when serious technical issues arise do we step in to fix these. Since we went through a series of processes when we developed the site, this ironed out a lot of issues during this period. Making the site as solid as possible.

Steve is a member of Open Source Matters board which helps the Joomla team keep the project running smoothly. He runs Open Source Training.

We're going to wrap up this "Big Sites" series with two more interviews. Then we're moving on to talk with webdesigners and how they use Joomla in to help smaller businesses and organizations. If you'd like to be featured, email with these details: