After a month of bringing the team together and finalize the milestones for the upcoming work, we already started to work with the JavaScript Framework Vue.js.
The coding phase began and we are spending every working day to reach the target of our project: The page-builder, which makes it possible to define template positions with an intuitive drag & drop editor.

Who are "we", the people who work on this project?

We meet every Friday to discuss the work done in the past week, problems, ideas and feedback. At the end of each meeting, we list the tasks to achieve for the following week. Besides these meetings, we do our best to share each day our progress and what we intend to do. And so we are working step by step towards the target.

Enough about the people behind this, what are we developing exactly?

The project New Joomla 4 frontend template: Page-builder has its main focus on an editor, which makes it possible to give template styles custom defined positions with the help of a drag & drop GUI.
Users should be able to create the build up of the frontend without code, HTML or CSS.
A first implementation of the rendered result can be seen in the new frontend template "Apodis", created for this project.

To define positions, users can open the Page-builder editor in the Template Styles menu. Here is the first choice to create a container grid. After this, elements can get added into the grid and these can contain elements like modules or even another grid to nest the build up into as many pieces as the user wants to. Elements such as containers, grid, module positions etc. are dynamic content, which means 3rd party developers could add their own elements by plugins and modify existing ones. This creates nearly boundless possibilities. 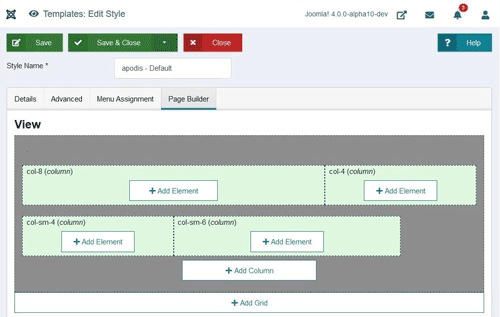 To adjust the page-build, the editor provides drag & drop and resizing functionality for the elements. This makes it very easy to use the editor and create your own positions. Further option to add custom CSS class names has been implemented.

The "leafs" of the Page-builder "tree" are Joomla built-in elements: Component, modules and messages. They output page content the users are accustomed to, from the default Joomla template behaviour. The editor will make it possible to edit each element, select module Chrome for each position & add new columns when needed. The output of the editor is a JSON object with the type, options and children of every element, which is stored in the template_styles table via a hidden param field. 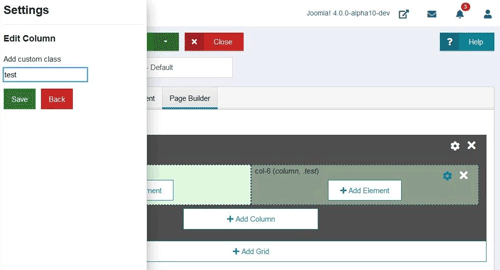 From the technical aspects, most of the work happens in Vue.js. Here we use different open source - downloadable components: 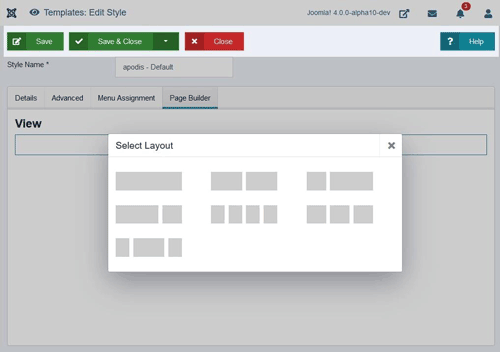 At first, the rendering of the created grid got integrated into Cassiopeia, but after some problems and a meeting, the new way should be visible in an also new frontend template: Apodis.

The new star of template design gets the page-builder elements in index.php and shows the rendered output directly. This is helpful for independent tests, where no stylesheets can interrupt the default behaviour, like it was the case at the attempt to include the rendering in Cassiopeia.

This is how it works: A com_templates helper function gets called in index.php and goes recursive through the JSON param obtained from the #_template_styles table, which includes type, position and all the information of saved Page-builder elements. Depending on the type and options, the rendering changes or adds HTML. In the future, the renderer will observe page-builder plugins and their desired rendering too.

After the first coding phase we can provide:

At the beginning of our work, we tried to use the same way of implementation as com_media and its Vue.js files. These files are in a resource folder of the component itself with their own package.json, node_modules folder and webpack file. 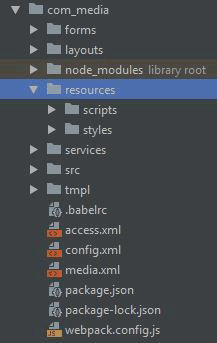 We wanted to stay as consistent as possible, but first problems appeared when the Drone tests were unsuccessful after commits which should not have influenced that. The webpack version had problems with our files and so we needed to change the structure with an updated version. The current state is that we moved all our Vue.js files and the scss files into media_source/build/com_templates, where normally all of these kinds of files are. After adding webpack into the Joomla root the Drone was happy again.
The new structure can be seen in the picture: 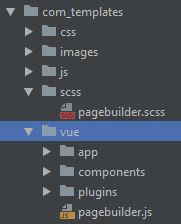 We are on a good way, but there is a lot more to do! Some bigger parts and a lot of small things are waiting for us to develop in the upcoming coding phases:

Until here the project progress was in the main focus, but what are the personal thoughts of us, the two students, who make their experience with GSoC and the work inside Joomla?

It has long been my dream to develop some application, which everyone and anyone can use for free.
When I heard about Google Summer of Code in my first year of college and was just starting with coding, I was fascinated by the idea of working with a long time open source organisation and fixing or enhancing some features which will be used by people all around the world.
Before GSoC, I had limited knowledge of web development, PHP and JavaScript and wanted to enhance my skills by working hands-on on a real project.
Joomla has a very beginner friendly culture, which encourages contributions from new developers. Mentors and members always try to help and provide resources as soon as possible. I feel contributing to an open source organisation is the best way to increase community/peer interaction, improve programming skills and gain experience while working on a real project and initiatives like GSoC help in spreading awareness and providing a platform to connect new developers to amazing organisations like Joomla.

Franciska and I are working along with our mentors to make page builder as easy to use as possible for amateurs and at the same time flexible enough to expand the functionality via 3rd party developer plugins.

This project is a great experience to work every day on something that grows fast, but also has a limited time, which flies fast too. I already developed in and with Joomla, but the Page-builder is a completely new challenge, because of Vue.js.

Sometimes it is fascinating how easy the implementation can be, but nonetheless happens a lot which is time consuming and not easy to solve. Where Vue.js has a very good documentation, the components do not always. Another problem was using webpack and npm to build the scripts. I never really worked with this part of web development, but I learned to do this.
In general: To learn something was a big motivation for me to apply for this project and until now I am not disappointed!

Which is also something really interesting is to work together with Nitish. We have different backgrounds, but are working side by side towards the same target. Until now we divided the work fairly between us and even without big conflicts. And so I’m looking forward the next coding phase and I’m sure our work will grow together more and more to become the vision we have for the Page-builder.