Joomla at the 2018 Google Summer of Code Mentor Summit

In 2018 Joomla participated in GSoC for the 11th time with 7 student projects. The GSoC season ends with the GSoC Mentor Summit.

This year, the Joomla GSoC Team sent two of their Admins, Puneet Kala and Sandra Decoux, to the Summit held in Sunnyvale (CA) from October 12 to 14, 2018 with an aim to learning how to improve our participation in the program from other admins and mentors. 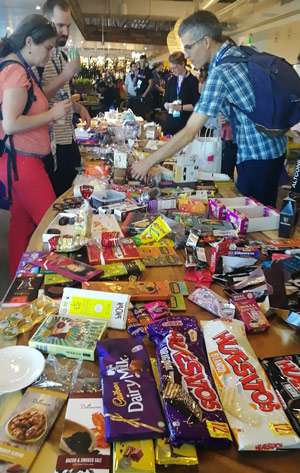 With approximately 300 attendees, the event was lead by Stephanie Taylor and the Google Open Source Team. We would like to thank them for the perfect organization!

The GSoC Mentor Summit was the perfect place to eat chocolate, talk and learn from other organizations during two days of unconference style, lightning talks and sessions, all focused on topics around GSoC and how to improve it.

During the summit, Sarah Maddox, a tech writer at Google, talked about her idea to bring more technical writers into open source projects and proposed a "Google Season of Docs" (GSoD) similar to Google Summer of Code but with focus on documentation and technical writers, rather than on code and students.

During the GSoD discussion, we talked about how to improve documentation and solve the issues surrounding delivering it. It soon became obvious that many organizations are facing similar difficulties. The most common issue being keeping documentation up to date whilst providing full feature documentation for users and developers proves to be a real challenge for Open Source Projects.

GSoD could be a great opportunity for Joomla to provide improved documentation to users and extension developers alike thanks to the help of tech copywriters. Let’s hope this idea will be turned into a new Google Program.

We attended several open discussions, including those on how to recruit, motivate and keep mentors (led by Martin from Jenkins), how to fail a student (or a mentor), and more.

We also discussed Google Code-in (a global, online contest introducing teenagers (13-17) to the world of open source development). This is also a great program and we hope that Joomla will have the resources available to participate in future editions of this program.

Being part of these discussions, we were happy to see that the Joomla GSoC Team faces the same issues that other organizations do but were also refreshed that we face less of them than others, a tribute to the fact that we have great students, mentors and admins. Again a huge thank you to all of you!

During the summit Stephanie Taylor announced the GSoC 2019 Edition and of course Joomla will apply again. Thanks to our discussions with other orgs, the 2 Admins started to plan and improve the GSoC 2019 process.

What is Google Summer of Code?

Since its inception in 2005, Google Summer of Code has brought together almost 11,000 university students from over 100 countries and 500 open source projects to create millions of lines of code.
The program is designed to encourage student to participate in open source development.
The goals of the program are: