The Version Votes Are In

Just over a week ago, the PLT had a summit in San Jose, CA and asked the community to vote on the next version number of Joomla. There were two options and both had their pros and cons. Calling the January 2012 release Joomla 1.8 would have provided continuity with the currently available 1.6 and 1.7 releases, but would have required explaining why it was the exception to the rule that x.5 means a long-term release. Calling the January 2012 release Joomla 2.5 would provide consistency going forward (and backwards to Joomla 1.5), but would be an odd "jump" in the numbering since there will be no Joomla 2.0. There were plenty of questions and much discussion around the options, but now the vote is in. 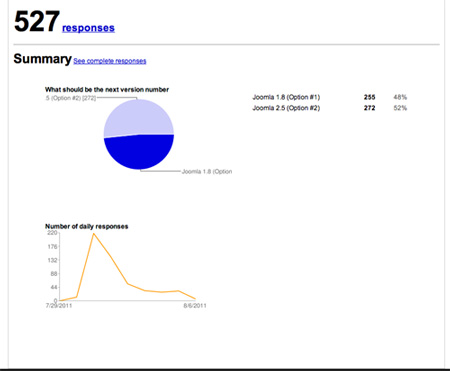 By a slim margin, the winner was Joomla 2.5. Seeing the makeup of the vote (it wasn't a landslide), it's clear that the community is sharply divided on the question. Hopefully, in conjunction with the 6-month development cycle, there will be clearer expectations in the future with regards to releases and support.
The vote was a way for the PLT to gauge the pulse of the community on this issue so the next steps are to prepare for the release of Joomla 2.5 in January 2012.
Thanks for voting!