Recently, we held elections for individuals who will lead each Department within Joomla. The results of the elections were announced in the following blog post: https://community.joomla.org/blogs/leadership/3097-joomla-department-coordinator-election-results.html 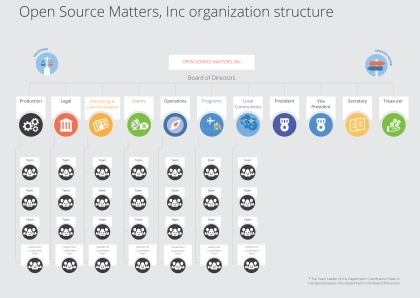 The time has come to open the floor for nominations for the following 4 Joomla! Officer positions:

The Officers sit on the Board of Directors and are represented in the image below as the four icons on the right side of the top row.

The voting process to elect Officers is a little more complicated than voting for Team Leads or even Department Coordinator Team Leads.

While the By-laws give a few examples of this, I will attempt to clarify:

It is a good idea for all nominees to familiarize themselves with the Bylaws especially the sections relating to the Officer roles:
http://opensourcematters.org/images/documents/20-10-2016-OSM-ByLaws.pdf

A personal note from our current President of Open Source Matters, Sarah Watz:

I have been honored to serve you in the Joomla! Community as the President of Open Source Matters, Inc. since April 2014. And as a board member since October 2012. Since Open Source Matters was founded we had had several Presidents and that is one of our strengths as an organization. That we bring in new leaders to our leadership positions. Being one of the initiative takes to the new structure I am certain that the members will utilize their voting rights to nominate and elect leaders that are not just known and liked by the community but more importantly will bring well needed value to the project in their leadership role. I have had an amazing and sometimes challenging experience during my years in the Joomla! leadership. I have decided not to run for the President role for this upcoming election. I would like to take this opportunity to thank each and every one of you for everything you bring to the project. You are awesome!

*Please Note*:
There is no reason that someone who was nominated or elected for Team Leader or Department Coordinator cannot also be nominated to serve as an Officer. In the case where someone is elected to an Officer position and they already hold another leadership position, their other role will be back-filled.

Thank you to everyone involved in this great community.