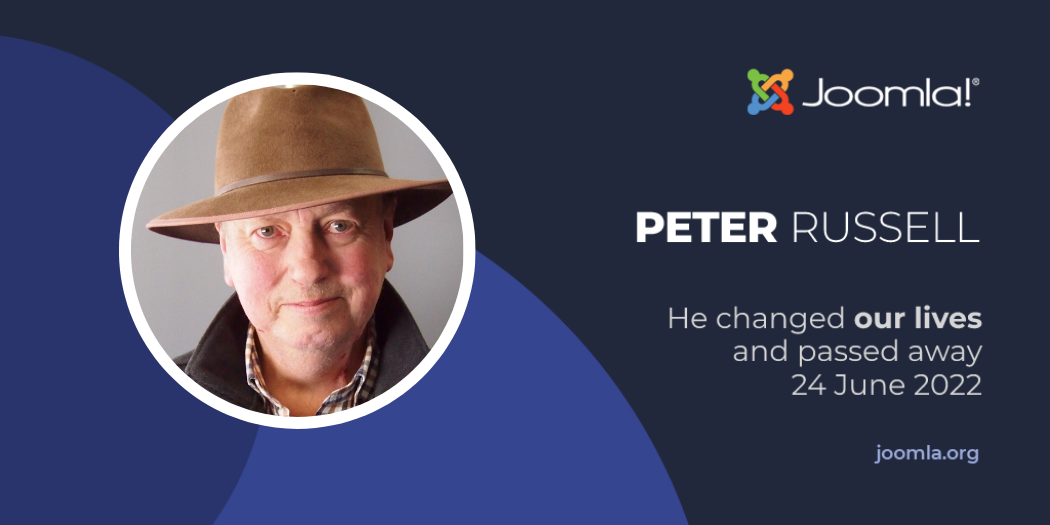 It is with great sadness that we announce the passing of Joomla! co-founder Peter Russell, yesterday morning (Friday, 24th June 2022 AEST), after battling illness for many years.

Pete, was a marketing and PR genius who played a pivotal role in the creation of Joomla! He had a unique ability to strike up a conversation with anyone, anywhere and within minutes he was your best friend. He was a great raconteur and an avid photographer with a passion for classic cars that he loved to share.

As a Joomla! co-founder Pete holds a unique place in our collective history. It’s a story that is rarely shared but as Pete always loved a good tale let me share it with you in his honour.

Mid 2004 was a challenging and stressful time for the small band of people that created Joomla!. Most of us had never met in real life, video conferencing did not exist yet, and all communications were done either by email or irc chat. The additional complexities of language barriers and timezones did nothing but add to the lack of sleep and stress.

Finding a name was never going to be easy. It led to many arguments and probably the only thing that this small band of pirates really  disagreed on. There were many suggestions but finally we had a small shortlist. We argued, we debated and we argued some more. We had a vote and then we argued about the voting process and the counting.

Finally Pete had had enough and he announced that he had called in a favour with a branding agency in the USA who worked with Disney. If we committed to accept their decision on the name then they would solve the problem and use their expertise and experience to define the name.

It was such a relief to us all that someone with the appropriate skills was offering to do this for us that I don’t recall there being any debate - we just bit their hand off and said yes please. So Pete sent them the shortlisted names, which if my memory serves me well were PrimaryKey, Zegris and Jumla, and we waited for their reply.

As we all now know, the final decision was Joomla! Not exactly one of our choices as they changed the spelling and added a bang(!)  but we kept to the agreement and accepted their choice and the rest, as they say, is history.

But the story of the name doesn’t end there.

Many years later I was preparing a presentation for J and Beyond and I realised that while I knew the name of the person who created the logo, Alan Urquhart, I didn’t know the name of the branding agency. They were responsible for giving a name to something that shaped my life so surely I should know who they were.

I asked around and no one else knew either. Finally I flew all the way to Australia for a JoomlaDay and went to visit Pete in Shepparton. He had been ill for quite some time and had gone home to spend what he thought might be only months with his family. (That was January 2013 - so much for doctors and their predictions.) I asked him repeatedly and all he would ever say was that he had promised to keep their name a secret. But the smile on his face and the twinkle in his eyes told another story.

So Pete, if you’re listening, that branding agency was you wasn’t it? You saw that we would never agree and that it was distracting us from the tasks ahead. You knew we would listen to experts and you didn’t let the fact that we didn’t know any get in your way.

Thank you Pete, you changed my life.

A live stream will be available from 10:45 am AEST on the Merritt Funeral Services FB Page or via their website

In lieu of flowers, donations to the Australian Kidney Foundation - Kidney Health Australia or https://www.kidney.org.au/ would be greatly appreciated.