Tešanj (pronounce 'Teshagn') is a small ancient town in the North of Bosnia and Herzegovina, a now independant country that was once part of what was Yugoslavia.
Although it looks now totally peaceful, nothing showing, except for a few bullet holes on some walls, the terrible war that took place in that region of the world from 1992 to 1995, I am told that, beyond the curtains, some old loves and hates are stil present between the 3 communities.

It is there that was held on August 12th and 13th, the first JoomlaDay ever in what was Yugoslavia. The ancient Illyrian ( http://en.wikipedia.org/wiki/Illyria ) sun symbol was chosen as the logo of the event, to further show the need for unified efforts in the region.

It was the occasion for 3 co-founders of Joomla – Emir Sakiċ, Brian Teeman and myself– to meet again in person for the first time since the 2005 first Joomla core Summit.
Happily, that reunion was not the most significant part of that event.

It was also not only the first time a formal Translation Teams meeting was held in Joomla history, but also a great symbol of the slogan: "Make Joomla!, not war!"

After the terrible choc of the recent wars in this region, it demonstrates that people of good will have no borders and can cooperate to help communication between torn apart nations.
I do feel strongly that Joomla! showing the example is a great accomplishment.
The photo hereby speaks for itself: 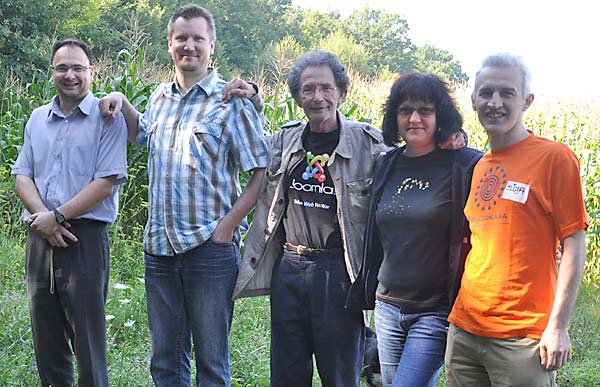 Launching a first time JDay on 2 days was a challenge and attendants did have to face long trips on winding roads to reach Tešanj (21 hours bus for Ilija to come from Macedonia). It is therefore with extreme attention that the various conferences were listened to. Between the presentations, which went from the history of Joomla, muultilanguage in 1.7 to developing with MVC, the Bosnian coffee pauses were the pretext to go further into the respective experiences with Joomla. Tweets went on and, yes, wifi was working great (a steady 2.44 mbps) and was free, contrary to some hotels in California…

Although it will not surprise our international language communities, the diagram hereby demonstrates more than with a thousand words the importance of Joomla in some countries. The statistics concerns the .mk domain names. 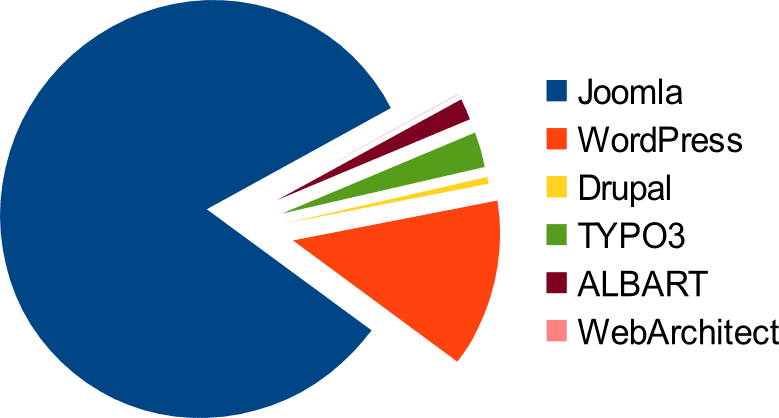 The Translation Team meeting was very positive. Things are so much easier when the virtual forum aliases are replaced by real life people! The latin alphabet users (Bosnian, Croatian and Serbian) agreed to extend their collaboration, not only for the language packs, but also concerning help online and tutorials.

Before the last trip to the Internet Café and its delicious 'čevapčiċi' (search on google ), the hard core organisers and conference presenters gathered for an ultimate group photo in the town theater.

Thanks again to Admir Agiċ and team for the perfect organisation of the event (http://joomla.ba).

The last words were: "Let's meet next year in Sarajevo!" Joomla! rocks! "Joomla! je zakon" or "Joomla! је закон"
Another symbol, I guess.