The Joomla! Extensions Directory (JED) reached 6000 published listings this week.  We wanted to take a moment to share what that means and additionally give an overview of how the JED statistics compare with both Wordpress and Drupal.

Time for some quick facts:

As you can see in the chart below, the current leader in number of available add-ons is Wordpress, Drupal is second with Joomla coming in right behind with only about 700 fewer listings. 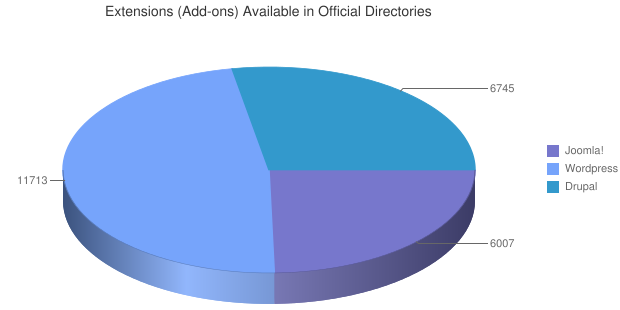 But, that's misleading. Here's the real picture...  While there are more add-ons listed in the Wordpress directory, the number of downloads in the Joomla! Extensions Directory is far higher and more than double the average per extension!  Drupal's data is incomplete, but included is an educated guess based averages of their provided usage data.

With over 187, 631 registered users of the JED it is not suprising to see the rapid growth of the directory and the ecosystem surrounding it.  But then I hear you say..  "What's next?"

Upcoming new Editor's Picks - In a recent blog post the JED Team opened up nominations to the general community for Editor's Picks.  Now that the nomination form is closed and over 1100 nominations have been submitted the JED Editorial Team will be making it's selections and reviewing each extension chosen.

Upcoming Social Integrations - In a push to further tie the listings on the JED to "individual choice" the site will have more features regarding social sharing and media integrated into the listings.

Easier Terms of Service and Submission Process - As technology changes, so does the manual tasks that are necessary for daily business.  The JED is no exception.  Because of new advancements, the JED Terms of Service are currently in the process of being simplified.

More Categories - Extension Specific categories are growing daily and more are on the way!

And much more...  stay tuned for further advancements!